Raleigh, NC - Twenty percent of North Carolina’s students are not attending the state’s traditional public schools — and that percentage is expected to continue rising.

New statewide figures released this month show that homeschools, private schools and charter schools all continued to add students during the 2018-19 school year at the same time traditional public schools lost children for the fourth year in a row. The percentage of North Carolina’s 1.8 million K-12 students attending traditional public schools dropped to 79.9% this year.

In the past, parents wanted to be part of a traditional community school so they could fit in, according to Mike Long, president of Parents For Educational Freedom in North Carolina. But Long said millennial parents want to make sure that the school meets their child’s specific needs before they join.

“If it does not meet the needs of their child after all, then they have no problem pulling their child from that school and going to another,” Long said. “This behavior is perpetuating school choice to be more and more popular, especially among millennials now having school age children. They absolutely are not happy at all being told or forced to go to their ZIP code school.”

But Keith Poston, president and executive director of the Public School Forum of North Carolina. said the new enrollment data shows what he feels are the negative consequences of the decisions made by state leaders.

“Even though the vast majority of North Carolina children attend public schools, there’s not much surprise there’s been growth in the other options,” Poston said. “The General Assembly continues to promote low-performing virtual schools and for-profit charter schools over really investing in great public schools.”

In the 2010-11 school year, 86.4 percent of North Carolina’s students were attending a traditional public school. But after Republicans gained the majority in the state legislature in the 2010 election, several new school-choice initiatives were launched.

In 2011, lawmakers lifted the 100-school cap on charter schools, which are taxpayer-funded schools that are exempt from some of the rules that traditional public schools must follow such as providing school meals and bus service. More than 200 charter schools are expected to be open statewide in 2020.

Home-school enrollment has continued to grow steadily over the years.

Since the 2014-15 school year, enrollment in traditional public schools has dropped statewide by 27,144 students. In that same time period, enrollment grew by 39,875 students in charter schools, 35,184 children in homeschools and 5,141 students in private schools. 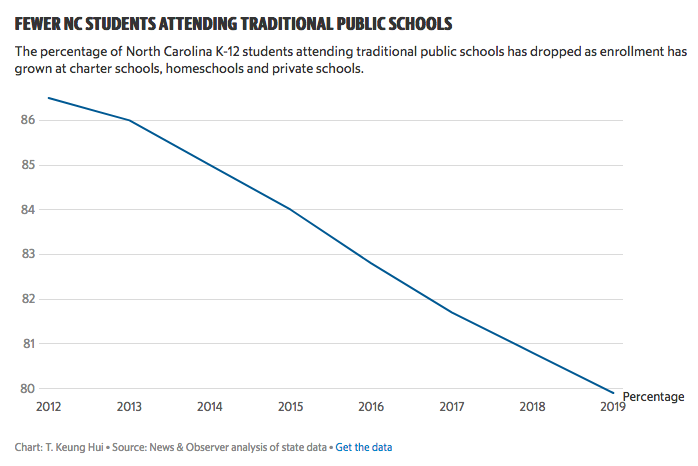 The growth of these other options, particularly charter schools, has drawn concerns from traditional public schools.

“Charter schools are having a destabilizing effect on traditional schools and school communities in Wake County where parents and PTAs are actively working to help all students,” Wake County school board chairman Jim Martin and Superintendent Cathy Moore wrote in a June letter to the State Board of Education.

Wake school leaders were unsuccessful in their efforts to lobby the state board not to approve five new charter schools that would open in Wake in 2020.

The Wake County school system’s share of all the students in the county dropped to 78% this year. This past school year, the school district accounted for only 42 of the 2,081 new students in Wake County.

For parents like Didi Andrews in Raleigh, school choice has been a blessing. Andrews said she didn’t want to send her children to her assigned Wake County school because she thought it was too large and wouldn’t be a good fit.

Andrews’ children attend Raleigh Oak Charter School, which opened ln August 2018 as the first Waldorf public school in North Carolina. Andrews said she likes how the school uses purposeful learning with activities such as hand knitting, woodworking and learning how to play a wooden flute.

“They spend a lot of time outside and focus on the whole child and developmentally appropriate tasks and expectations,” Andrews said. “And the smaller setting allows teachers to really know the students. The teachers also focus on their social emotional well being.”

While critics bemoan the expansion of school choice, Charlonda Brown of Goldsboro said people should consider the plight of families stuck in what may be a failing public school. Brown has used the Opportunity Scholarship program to help pay part of the tuition for her two children to attend Wayne Christian School.

“What if you’re a parent like me who doesn’t know about he Opportunity Scholarship?” Brown said Wednesday at a school choice event in Raleigh attended by U.S. Education Secretary Betsy DeVos. “Then you don’t have choice.

“You’re sentenced to the school that you’re assigned to that is not a school that’s going to adequately prepare your child to do work, let alone go to college. So now you’re in that cycle of poverty and that gap continues to widen.”